Somkhanda Community Game Reserve, owned by the Emvokweni Community Trust (ECT) and co-managed with the Wildlands Conservation Trust, has achieved another major milestone. Established in 2005 and formerly declared a protected area in 2011, Somkhanda welcomed a herd of 11 elephants this week. The elephants were donated by Nambiti Game Reserve, another KZN community owned game reserve. This is the first time that 2 rural communities have worked together to extend elephant range.

Wildlands and the ECT worked with the Elephant Rhino and People Project (ERP) over the past year to identify a suitable herd for Somkhanda. Their support has been phenomenal. ERP, funded by Group Elephant.com, actively identify elephant herds that are under threat and find them new homes. They have invested over R 250 000 in the capture and translocation of this herd to Somkhanda.

The introduction of the elephants will underwrite the financial and ecological sustainability of Somkhanda. It represents a key step towards establishing the reserve as a Big 5 reserve, essential from an eco-tourism investment and development perspective, whilst re-establishing the ecological processes that are so important in savannah systems, allowing them to be healthy and functional systems.

Under suitable conditions, elephant can breed very rapidly, with populations in fenced reserves often becoming larger than is ecologically sustainable. Such was the case at Nambiti, who recognised the need to reduce their population size. This became an opportunity for Wildlands and ERP to assist in the translocation of a small herd from Nambiti to Somkhanda. 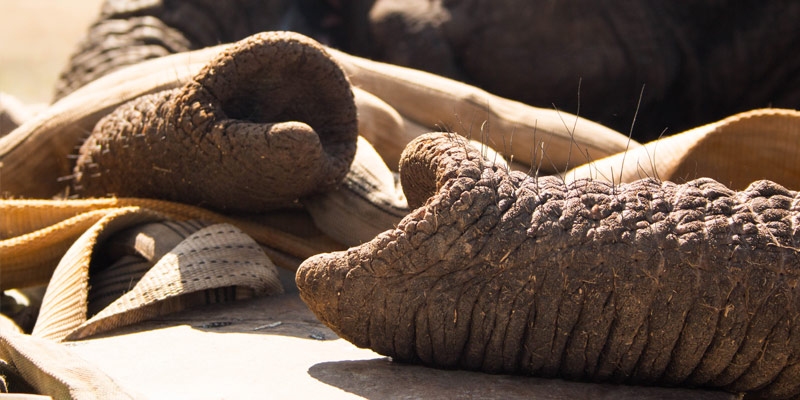 The process of obtaining the elephant has been one that has been carefully considered and planned by the Emvokweni Community Trust, the Wildlands team and its partners, ensuring that all necessary infrastructure and approvals were in place. Wildlands has worked closely with Ezemvelo KZN Wildlife to finalise the Somkhanda Elephant Management Plan, secure an Adequate Enclosure Certificate and secure the permits for the capture and relocation. When introducing elephants, it is important to introduce an entire breeding herd, as they have a very strong social and family structure, that needs to be maintained at all times. Elephant Management Plans had to be drafted and approved by Ezemvelo KZN Wildlife for both properties, to allow the translocation to happen. Conservation Solutions, recognised globally for their expertise in elephant capture and translocation, were contracted to manage the capture and relocation process. They have just completed the relocation of 300 elephant in Malawi, part of global movement aimed at finding Africa’s elephant safe space, given the pressure on their range and the demand for their ivory.

“The introduction of these elephant represents a key milestone for the Emvokweni Community Trust, underwriting their ability to harness and benefit from South Africa’s flourishing wildlife and eco-tourism economies,” commented Wildlands’ CEO Dr Andrew Venter. “From a personal perspective, the capture and introduction process has been one of the most humbling and emotional experiences of my life. Africa’s elephants are under threat, with over 100 being poached every day. Across the continent, communities and conservation organisations are fighting to stop this poaching and save this iconic species from extinction. The Somkhanda introduction represents a small, but incredibly important step in this fight. This process is dangerous for both the elephants and the incredibly brave and dedicated capture team alike. We are all deeply relieved that the herd have settled well and look forward to seeing them flourish in their new safe haven.”
“We at Nambiti are very positive about the move of some of our elephant to Somkhanda and their future there,” said Clarke Smith of Nambiti.
“ERP are thrilled to have been able to partner with the Emvokweni Community Trust and Wildlands Conservation Trust, in securing the lives of the 11 Elephant,” said Dereck Milburn, Director at ERP. “We wish Somkhanda Game Reserve the very best for the future and we look forward to visiting the elephants at the reserve and partnering with Wildlands in future projects.”
“A big thank you to ERP, Different.org and Nambiti Private Game Reserve for their support in enabling this project. Thanks to the Gumbi Community for supporting the introduction of the elephant and acknowledging this as a key development for their game reserve,” concluded Dr Venter.